How to Set Up an eBay Drop Shipping Business

It’s a good time to beef up your social media marketing. If you’re wondering how to draw in more visitors to your website, or how to make sure those visitors go from casual viewers to dedicated customers, clients, or fans, you might want to spend more time on Facebook. (Or Twitter, or Instagram, or — you get the idea.)

It’s not just about the President putting Twitter on everybody’s radar. Social media’s growing importance in most people’s lives has been a long, steady burn these past few years. From 2005 to 2015, for example, the Pew Research Center notes that social media usage in the US boomed from 7% to a whopping 65%.

And those numbers aren’t going down anytime soon. So, yes, the numbers are there. But you might be asking: what can you really get from sending out regular Tweets or posting on Facebook?

1. Social media gives you second (and third, and fourth…) chances. 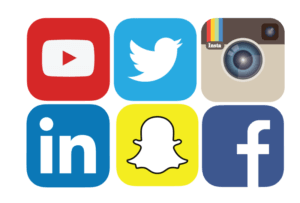 There’s no one social media network that you should focus on above all else. Sure, Facebook is one of the biggest out there, or Snapchat is all the rage with the teenagers. But any website worth its salt will have a presence on at least three social media networks where its audience is likely to be, and that in itself presents a big opportunity.

Did a user skip over your content on Twitter? Post it on Facebook, using a different message, style, and format, and you’ve just gotten another shot at catching your audience’s attention. Cultivating several social media accounts gives you multiple channels to push your material — and this multi-pronged front spells several chances for success for each new piece of content you create.

Having multiple accounts — and thus, engaging with multiple (and not always overlapping) audience circles — is just one part of it. Even within a single social media network, you get opportunities and tools to spread your content further. These networks live and die by their users’ interaction, after all, so features like hashtags, lists, and user groups are there to encourage sharing between users.

And here’s the good news: you can definitely capitalize on those same features to reach a broader base than you would with just your account. Jump into a relevant trending hashtag to introduce your product to people who are already inclined to be interested, or get your own hashtags trending to put yourself on more people’s radar. Do the same for user groups or pages, or maybe team up with influencers. (More on these later.) The networked structure of these social media arenas means your ripple can go far — as long as you do it right. 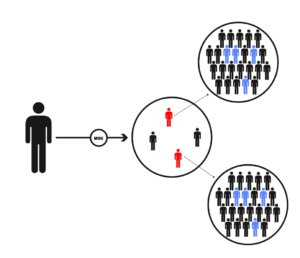 Speaking of user groups and pages, social media takes some of the work out of building a dedicated following or audience base. If you’re an established brand, chances are there are already customers who’ve banded together to celebrate your products. And if you’re an emerging company, you’re still likely to find pockets of users that fit in the market or field that you’re aiming to enter. In either case, your job shifts from building an audience from absolute scratch, to engaging with communities that are already there and finding some way to bring them together in support of your brand.

You can still cultivate new communities, of course, and established communities present their own unique challenges, but the fact remains that social media gives you a much richer base to start with. 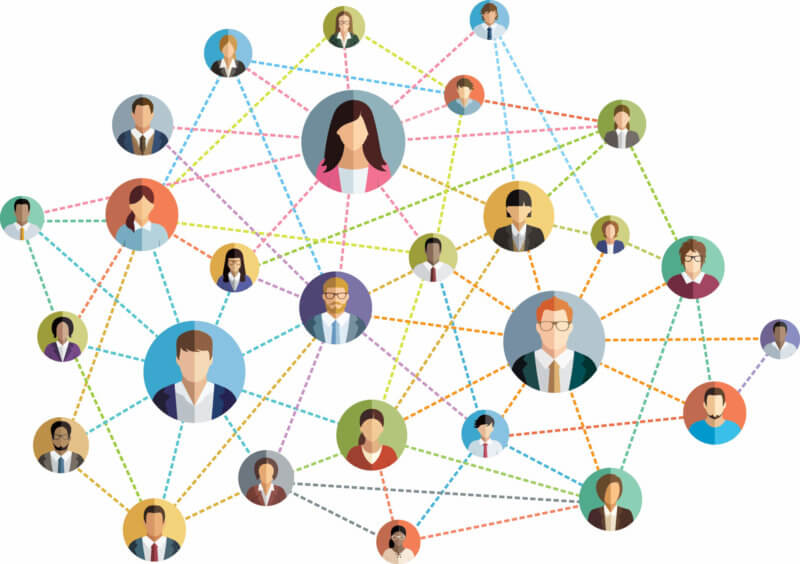 In a similar vein, the social media network structure means there will always be nodes where users tend to converge. Sometimes those nodes are celebrity accounts, respected members of a community, super popular vloggers, you name it. They present similar opportunities to established groups: they’ve got a ready audience, but more importantly, they’ve got existing clout and pull on the members of that audience. So they can give you another lever to help tip users towards your website and product.

Why are influencers helpful? They let you focus. Instead of pouring time, energy, and resources into convincing thousands of users directly, you can invest a fraction of that effort into a partnership with a known influencer, and watch as they work their magic and do the persuading for you. Since they’ve already built up trust and loyalty with their audience, they’re more likely to win them over than you could do on your own.

Now this is a bit opposite of the previous point. While influencers on social media networks can serve as your “liaisons” with various users, the fact remains that your own social media accounts also put you in direct contact with your customers.

That can be both pro and con. If you mess up, you–and everyone you know–will definitely hear about it. But that means you won’t have to expend resources to solicit audience responses either: if you open up your channel, your customers will come to you, and you’ll hear about bugs, issues, and so on without prompting. That gives you a chance to strike up a dialogue with the aggrieved party, get in direct control of an issue with your product or services (eliminating the wild cards of customers possibly receiving bad advice from third-party or unauthorized sources), and get more information to improve your services and products, too. And if you resolve the issue with grace and skill, well, social media is a public platform — and you might even get some good publicity in the end.

If done right, social media gives you more and richer ways to engage with your audience, as well as with potential new customers or clients. The greater degree of freedom and modes of response on such personal spaces gives you a better glimpse at what your customers are like, how they behave, how they receive and respond to your marketing strategies and products. You can get more information to help inform your business decisions while imbuing your customer relationships with a more personal touch.

That human connection elevates your business from simple transaction to a fun, convenient, and more relevant part of your customers’ lives. If that’s not a recipe for deep customer loyalty, then nothing is.