The Beginner’s Guide to CDNs

How to Set Up an eBay Drop Shipping Business

“CDN.” Anyone looking to speed up their website has run into that term. Chances are, you’ve seen it yourself—whether as a tip to improve site performance or as a bonus feature from your website host.

But what is CDN, and why should you care?

What is a CDN?

CDN stands for Content Delivery (or Distribution) Network. It refers to a, well, network of interconnected servers.

These servers work together to handle large volumes of website traffic and deliver content to numerous users at the same time. Unsurprisingly, a CDN is often cited as one of the first steps for boosting your website’s speed and reliability.

How a CDN Works

CDNs store copies of content in their servers. Also known as “caching,” this process allows all the servers in a content delivery network to serve users connecting from different locations, or to different users at the same time.

Each server has access to all of a website’s content. When one server is busy handling a user request, another can step in to respond to other users. This way, users don’t need to wait to be served — as they would have, if the website content were only coming from one source.

With billions of users, millions of websites, and thousands of internet service providers (ISPs) worldwide, though, building a good CDN is no easy task.

Successful CDNs require a vast server network to handle tons of content, high volumes of traffic, and the numerous locations that web users will be connecting from. You’ll usually find that a CDN spans multiple locations and uses a staggering number of servers.

Why Does Geography Matter?

Location is a common concern when discussing CDN, and for good reason.

Internet connection speeds and reliability are still uneven. You’ll often get the best performance if your source (e.g., the server hosting your website) and your endpoint (e.g., a website visitor) are as close to each other as possible.

Think of it like sending a bottle down a river. Sure, you can rely on the message traveling from one end of the river to the other, no matter how far. But the process goes much faster if there’s not much distance between each end of the river in the first place.

What happens when users and servers are far apart, or when there’s only one server to serve multiple users?

You get the issue known as latency, a fancy term for the time you spend waiting for a webpage to load.

Geography and availability aren’t the only factors when it comes to website speed, but they are big ones. They’re also the ones that CDNs are best designed to reduce. 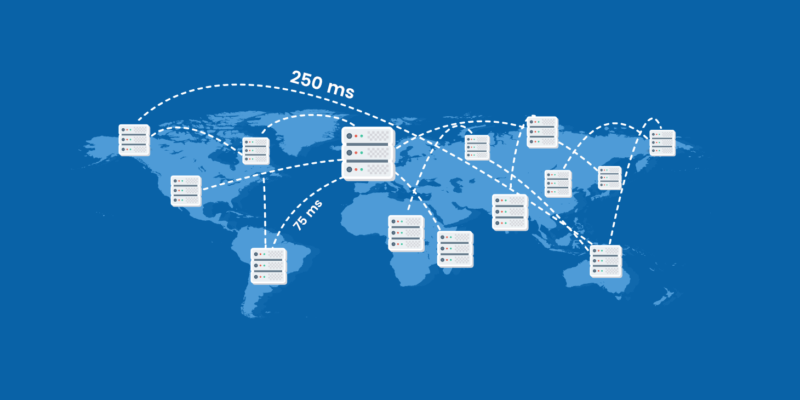 Let’s say you’re a US-based website owner. Your website gets visited by a browser from Singapore. Rather than jumping the Pacific to make the connection, a CDN could simply route the request over to a node based in, say, China—or even in Singapore itself.

Each node in a CDN is called a PoP, short for “points of presence.” Each PoP is basically a data center that’s home to tons of servers.

These servers carry copies of a website’s data. That’s why they’re also known as “caching servers.” Since there are numerous caching servers in the network, this also tends to solve the availability problem: more than one server can respond at any given time. 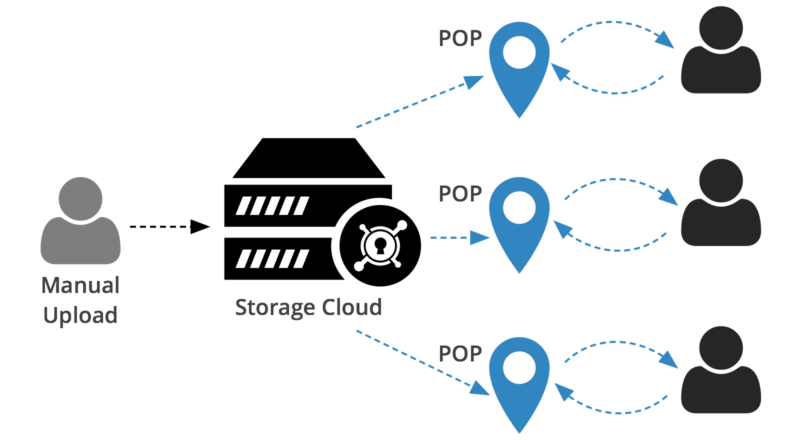 Most CDNs tend to keep their PoPs near or connected to large Internet service provider (ISP) hubs. That also shortens the distance that your data needs to travel. Since most major ISPs tap directly into the connective wires that form the backbone of the Internet, the CDN has more throughput at its disposal.

Let’s go back to the bottle and the river we talked about a while ago. Tapping into these major connections means your bottle will be carried by the rapids of the Mississippi. That’s a heck of a lot faster than bobbing along a sluggish backwater channel.

Why Should You Care About Speed?

Nobody likes waiting—web users more than most.

We’ve all gotten used to the instant results of a Google search, the quick response of an app. Consequently, most of us are prone to abandoning an online store, a blog, or any other website that takes way too long to load.

In fact, way back in 2012, the Aberdeen Group released a study that showed how a 1-second delay in page loading time results in:

In today’s multimedia-heavy landscape, website owners also try to cater to visitors’ expectations of great visuals, interactive elements, or even just high-quality audio and video. As a result, abysmal page loading times aren’t as unlikely as you’d think. In fact, slow loading times are such a risk, and speed matters so much, that Google added page speed to the list of factors that influence search rankings.

Are CDNs Only For Speed?

Is speed the only reason you should get a CDN?

The short answer: no. It’s a big one for sure, but a CDN provides other benefits that are worth your dime.

For one thing, you get multiple copies of your data stored on different servers. You can distribute site traffic across a wider network. Not only can you handle a bigger load overall, but no one server node will be at risk of being overwhelmed by visitors.

As a result, you get a more resilient website. You’re at lower risk of buckling under the weight of DDoS attacks or just regular old spikes in traffic.

Aside from that, many CDNs can also be configured to screen your site traffic for spammers. This frees up your bandwidth to carry requests from legitimate users. Your servers’ request queue stays uncluttered. Plus, you save money—especially if your web host tends to charge overage fees.

With the web playing host to billions of users and modern websites packing richer multimedia content, CDNs are moving from luxury to necessity. In fact, from 2007 to 2010, the number of CDN providers in the market jumped from 27 to nearly double that number.

Anybody aiming to build a successful website needs to understand the technology behind CDNs. We’ve stuck with the basics for now, but watch out for more articles where we dig deeper into what is quickly becoming an essential part of everybody’s web experience.